When developing in JavaScript, I always get a little annoyed about the lack of a debug console on iOS. And when I say ‘lack’ I mean the complete ass backwards obfuscation introduced in iOS 6, requiring you to physically hook your iPhone to your (Mac only!) development computer to view debug output. This approach, including various remote debuggers that are out there, is much too tedious when you simply need to view a value, see the contents of an object or – more likely – see the error message(s) your script caused, indicating why it isn’t working in the first place.

To that goal, I have developed mobileConsole; a JavaScript console for mobile devices. It ‘extends’ the window.console to a visual, HTML-based console that shows you a console similar in appearance to Chrome’s excellent web inspector console. The main goal was to keep mobileConsole unobtrusive: not requiring any additional code. This is why I extended window.console so I could keep using all my regular console events, without having to add extra error reporting in my projects. This has resulted in mobileConsole being a ‘click-on’ script; it will just intercept all console (and window.onerror) events and display them, without modifying anything*. 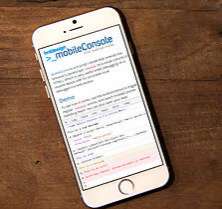 On a mobile device, mobileConsole should have already opened automatically. Otherwise, open it by clicking the green button. The buttons each trigger some regular, native console commands, as described. The ‘Trigger an error’ button triggers a non-existing function, which will result in an window.onerror ‘undefined’ error, which is handled by mobileConsole as well.

On a desktop, you can also open your Web Inspector’s console to see what is happening over there. Hint: while your ‘real’ console is open, trigger some console events (log, info, warn, error, trace) yourself to see mobileConsole handling them. Or, additionally, trigger some events from mobileConsole’s own console commandline (introduced in mobileConsole 0.5).


Note: not all devices support every one of these methods natively, in which case mobileConsole will emulate them, and log a ‘this method is not supported on this device’s original console’ message.

Include it as your first script, preferrably as the first line inside your <head> section. You can check the demo page’s source for reference.

As of version 1.3.3, mobileConsole was tested (and working) on:

jQuery – Looking ‘under the hood’

Check if element is visible